Djamel wants me to share this with you all -he's a 'life saver'....

Around lunch time today he came to the kitchen and asked what Dizzie the cat was doing in my room banging around and scratching everywhere (Dj's not allowed in my bedroom at the moment as it's almost his birthday and sometimes things are in there that he's not allowed to see, so initially I thought he was just finding a way to try to get inside)

I told him that Dizzie wasn't doing anything in my room because Dizzie wasn't inside, he was out in the garden. At this point he looks genuinely scared and says 'Well what exactly is making that strange noise inside your room then?'

We go together - me expecting to hear nothing but he's right....a really strange banging/scratching noise is coming from inside the fireplace!
Blast! must be a bird that's fallen down the chimney...but then I get this other mad idea that maybe it's a rat or something dodgy....the scratching really doesn't sound like a bird at all.

So together we move furniture and peek inside the vent with a torch to see.... a young starling that's fallen down inside.

I ring Rab and he says he'll be about half an hour (he's the one that deals with things like stray birds in fireplaces - I don't 'do' things like that because I'm too scared of hurting them/damaging wings etc when I get them out).

Djamel being his normal (impatient) helpful self decides to unscrew the vent so when Dad gets home there's less for him to do. I tell him to only take 2 screws (so of course he takes 3!).... 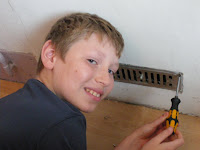 Two minutes after Rab gets home the bird pecks at the vent determined to try and escape and it comes flying off and the starling is then frantically flying around our bedroom like a crazed thing bumping into everything and pecking whatever he lands on in his blind panic.

Rab's running from one side of the room to the other attempting to catch him, Djamel is shrieking and saying 'No daddy, this way - oops, no actually 'this' way now, over here, look over there, now he's gone this way' and Rab says 'Look, I'll catch him but you need to just shhhhh! for a minute' (in other words, just BE QUIET for one minute) LOL.

Eventually after about 10 minutes, I say let's just open the window and see if he'll go out himself - so the daft bird then crashes into the closed window and stuns himself - Rab grabs him quickly....much to Djamel's delight.
Rab calms the bird down, who then repays him by pecking him really hard on the finger - at this point Rab decides time for him to go and releases him out of the window to freedom. 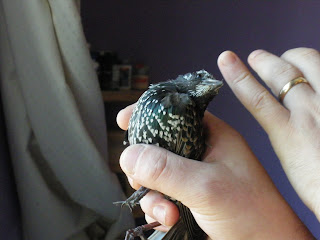