As you know, today was the first day of Secondary School for Dj.....He seemed to be looking forward to it and although he confessed to feeling slightly nervous he was not terrified.
I left him there looking a little lost and scared but knowing he'd be okay once I'd gone. Told him where I'd be at home time and left him to settle in.
Both Rab and I collected him today and he came out with a smile (always a good sign on a first day) and he said it had been fine.
He then filled us in on his day and literally didn't stop talking all the way home. So in brief, this was his day.....
Oh and lastly, during the summer holidays they were asked to prepare a piece of homework on themselves.
They could choose to present in either Art form, story, photographs and text or powerpoint document on a USB....Dj decided to do a mosaic of himself and write a short piece on his likes/ dislikes using his name as a key....
This is his mosaic below (A4 sized)........ 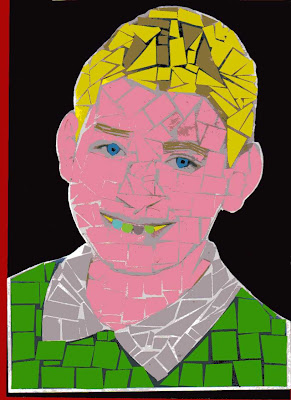 And this was the text that he wrote alongside it.....

D = Decision making, this can take me some time. I like time to think..

J = Jumping, I like to jump sometimes, I find it relaxes me and gets rid of stress

A = Art is something I find relaxing. I like to be able to spend time getting things just right

M = Military machines, weapons and wars is a subject that really interests me. I have WWII items that I collect

E = Energetic – sometimes I find I have more energy than I know what to do with! Using the trampoline here will be good J

L = Listening, I like to listen and think – it is something we should we should all do more often, listen to each other and think about what we say.

So the things above tell you a little about me. I’m not so good at talking about myself, in fact at Primary school I wouldn’t have been able to stand up here and do this.

I used to think that no-one was very interested in me but since I’ve grown up I’ve realised that I am a good friend, a great listener, a good advisor and I’m fun to be around.

I’m looking forward to doing really well here at this and making some good friends along the way.

He handed it in to his form tutor in the morning session - then during the afternoon the Head of Year came into his class and held up his work and announced that he really really liked this piece of work and could Djamel please stand up.....So apparently he did (amazingly, because in the past he'd have tried to disappear underneath the desk)
Mr W the Head of Year then said there was going to be a prize awarded for any work that he considered to be of a particularly high standard and 'This is the standard I'm talking about...Well done Djamel'
He was sooo proud of himself and the truly great thing is, that he accepted the praise without going into a blind panic - I think he's going to do well at this school because he's determined to.
Posted by Carole at 00:33