Cool, Calm, Exterior .... Not quite the same inside!

Firstly thank you for all your kinds messages of support, I have printed these out and plan to take them with me this afternoon when I visit the 5 Star Hotel KC, she'll love your messages of encouragement.
Right... where were we up to?..... Following the surgery she was kept in recovery overnight, the following day she was then moved down on to a normal ward. This was good in one sense but worrying in another, good she managed to skip going to intensive care but worrying because the normal ward is far busier and care for about 35 people split between 2 or 3 nurses, now maybe it's just me but you would have thought having major surgery would at least entitle you to one on one care for a few days, oh yeah I forgot this is NHS care..............
Any one in the future that tries to tell me how good the NHS are is likely to get a punch straight on their nose. So many stories within the first few days it's a joke really, I won't go in to them now as I'll let mum do that once she is back home, but for example, whose bright idea is it to give a newly qualified Nurse 10 patients to deal with and also someone who has just had major surgery.
In terms of mum's condition, She is on constant epidural, once back on the ward she initially took a turn for the worse as her blood pressure dropped dangerously low, looked as white as a sheet, swollen face and she was carrying a temperature, their concern was she has picked up a small infection.
After monitoring her BP is was decided that they will do blood transfusion during Wednesday night, 3 or 4 pints I believe and start a course of antibiotics.
During this time I am portraying my normal cool, calm and collected exterior (those of you who know me then you know I'm so laid back I'm practically horizontal most of the time) but to be honest inside my stomach was in knots (no pun intended) but thinking of the bigger picture and showing mum and also Rab that I am confident things are going in the right direction. Surgeon came round to see her and again confirmed surgery went as planned and was done all through keyhole, in his words "no more cancer in you Carole".
Went back to the hospital yesterday afternoon and was totally relived to see her looking a lot more alive to be honest, colour back in her, face swelling gone down. She tells me she had a bad night and hardly no sleep, doctor stayed with her the whole night due to the low blood pressure during this time she overheard them putting a crash team on standby for the whole night, can't even imagine what that would feel like knowing you are in potential danger.
However the good news is that the transfusion seems to have done the trick as they are no longer concerned about her BP as now over the magic 100 mark, she remains very weak and as only awake about 30 mins during the 4 hours I was up there.
She did make me laugh when she woke up and said I should go as she wasn't much fun to be with, had to explain to her this is not a social club and I haven't come up there for the sparkling entertainment at Hotel Kings College, not her job to be the hostess with the mostess, I'm sure we can give her 3 months annual leave any longer than that then I think she is just trying it on.
love to all and will update you again after the weekend
p.s Shents I don't remember that game at all, already erased from my memory, lol
Oh and I better mention Wednesday's victory for The Arsenal against Wolves, 0-2 away victory with the superb Marouane Chamakh grabbing both goals 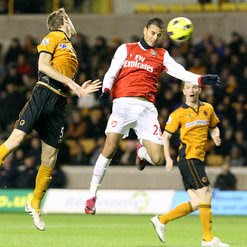