So this post is really just to bring things up to date now.
As you know I've been home for 10 days now and although still exhausted mostly, every day feels as though I maybe have found a little energy from somewhere. I'm managing to walk, slowly and painfully at times (muscles in stomach are painful not the actual wound - that's just uncomfortable mostly rather than painful)
I have no appetite and have to force myself to eat daily. People ask me 'What do you fancy to eat, anything, I'll get it - just say what you want' and the truth is I don't want anything.
I know I have to eat for obvious reasons but I simply cannot say what it is I 'want' to eat because I don't actually 'want' anything. I went into hospital weighing about 8st 4lbs and now weigh around 7st 9lbs....
It really pisses me off when people say 'You have to eat' because I'm not dim and I know that - what they need to tell me is HOW to eat when you don't want to......
Colorectal nurses advice at the moment is to survive on Ice Cream and Cream cakes (and even the thought of that makes me heave) :-(
No doubt I'll work it out eventually
Went to the GP last week because a large lump appeared in my neck, on the jawline. Left it a few days and when it hadn't gone I asked the District Nurses what they thought - they said it needed to be checked.
GP was quite bothered by it and decided to contact the Oncology team that I saw back in June and get me a referral. They've since contacted me and said they'll see me on the 14th December because that was always the plan after surgery anyway.
Despite my surgeon appearing after the surgery and declaring to my family 'No more cancer in you Carole' he's since admitted he cannot be sure of this.
A few days after that first declaration he came back and said he was waiting for lab/histology reports and couldn't confirm anything one way or the other until then - but at first glance it looked like he had probably managed to get a good margin....
On my last day in hospital he came and said he now had the histology reports which showed a 'poorly differentiated adenocarcinoma' and he was now referring me for 6 months IV chemo....I was gutted (in more ways than one)
I'm going to discuss things with the Oncology team at the other hospital but I have to tell you all that there is no final decision been made yet.
I am not happy about doing 6 months Chemo unless they can tell me exactly what we are targetting with this poison. I am fairly sure that I'm not going down the Chemo route unless there is still cancer in my body - more questions than answers right now.
Looks like I may well be asking for another PET scan at some point :-)
Right now I'm so weak and tired that I doubt I'd even survive Chemo anyway.
Going to the hospital tomorrow to see the Stoma nurses and get some new supplies ordered. It works okay (the Stoma) it's easy enough to take care of but I just detest it.
Dj asked me yesterday if I hated it as much as I'd expected to.....said I didn't really know right now because it's a bit soon yet, but I definitely don't like it.
Rab then pointed out that he didn't think I'd ever LIKE it, as such, but as time goes by I'll think about it all less. That probably sums it up.
District nurses come to me every other day to dress the wound and check that it's free from infection. I'm getting the stitches out on the 8th December and hopefully it's going to hold up. Looking forward to a long soak in the bath after that - showers aren't the same when you ache all over and just need a long soak.
District nurses are lovely, very kind and reliable. I've heard stories in other areas where people are let down regularly by nurses that don't arrive on the correct day or refuse to come at weekends - mine have been brilliant and each one has been so kind to me. Although they have busy schedules they always make time for a chat afterwards and ask if there's anything at all they can help me with.
So, to sum up - every day is still hard. I've cried every day since I've been home, sometimes I don't even know WHY I'm crying - other times I can pinpoint the reason or probable reason....
I feel so drained and exhausted that I have no 'Wow! I'm alive and the cancer's gone' feelings at all....I just feel like shit to be quite honest - roll on New Year!

This picture below is probably one of the least complimentary ones ever taken of me....(taken the day after I returned home from hospital - Friday, 19th Nov)....
Thanks Dj for saying 'Mummy, I took this picture when you were asleep and I SWEAR you do NOT look like this and the camera DOES lie'....:-) 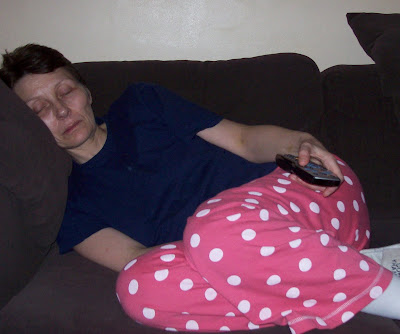