BE CLEAR ON CANCER CAMPAIGN

The Department of Health have just started a 7 week pilot scheme to attempt to make people more aware of Bowel Cancer. This pilot is initially going to be aimed at two areas in the UK, the East and South West and if they feel it was successful they will then roll it out nationwide.
I've decided to feature it here on my blog for obvious reasons.

“No one likes talking about their poo – it’s embarrassing. But if we see something different and tell our GP it could save our life.

“Early diagnosis makes a huge difference to cancer survival rates and bowel cancer is one of the biggest killers.

That’s why the ‘Be Clear on Cancer’ campaign uses simple messages to make people aware of the early signs of bowel cancer and to give them the confidence to talk to their GP about them.

“To make sure we get it right, we’re testing this campaign in two regions and, if it works, we’ll roll it out nationally.

My only 'gripe' with this campaign is the age range it is targeted at....currently they are aiming to get more over 55's aware but I want EVERYONE to be aware.

The simple facts are this - Bowel Cancer affects approximately 38,000 people per year in the UK.

75% of people fall into the over 60's age group which means that approximately 9,500 people may feel 'This doesn't affect me, I'm too young'....Harsh reality is it COULD affect you so if you have symptoms you need to get them checked.

I was 49 when diagnosed with Rectal Cancer, Stage 3 - my surgeon estimated that my cancer had been growing, silently without obvious symptoms, for anything up to 8 years...that made me potentially around 41 years old when it began. Screening me at 55 would simply have been way too late.

There is no plan to screen earlier but if people notice symptoms then they MUST contact their GP and insist on being checked over. 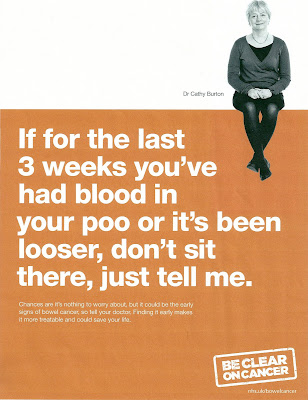 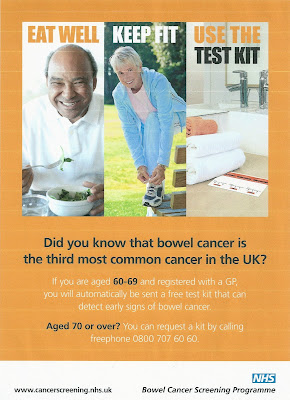 If you have any of the higher risk bowel cancer symptoms listed below for more than six weeks you should visit your GP:

Please remember that most of these symptoms will not be bowel cancer, but to rule it out you must first visit your GP.
Reliable information available from www.beatingbowelcancer.org
Finally, if you're in the East or South West areas - let me know if you've seen this advertising campaign yet and what you think about it - ie; is it effective; the right message; enough information; too much information; embarrassing; all comments welcomed......
Look after those bowels and 'if in doubt, give the GP a shout'.
Posted by Carole at 19:20