DO NOT READ THIS POST IF YOU DON'T WANT TO HEAR GRAPHIC DETAILS OF MY SYMPTOMS ....

Since my appointment on Tuesday I seem to have gone 'downhill' somewhat. Not mentally really more physically really.
Tuesday evening I developed a pain in my left buttock muscle that travelled all down my leg to behind my knee, best way to describe it would be a nagging neuralgia type of ache and my bum was seriously sore - as usual...
Wednesday muddled through by taking painkillers then developed severe thrush, splitting headache, pain at the base of my spine that is just so uncomfortable it hurts to even move, upset stomach, still got symptoms of the sinus infection as well despite taking the antibiotics (which were responsible for the thrush outbreak), slight urine infection and damn fed up.....
Thursday am felt slightly better in general - most things back under control with painkillers, canisten cream and pro-biotica tablets. Rab took Dj to school so I just relaxed at home and did the minimum all day.
During the late evening I felt like I had trapped wind in my stomach - which is quite painful at the best of times and even worse when you know you really want to 'fart' but at the same time don't want to because it makes your bum feel more sore....mind you, I should probably make the most of 'farting' right now being as how I soon won't be able to once my bums gone :-))
....... No Dj, the bag probably WON'T explode, I've checked - but it will sound like an Icelandic hot steam gezer apparently...! :-)

Then late last night I finally did manage a really good expulsion of 'wind' in the loo, only to find I'm now farting out clumps of blood.

Now that's a real pain because since the biopsy I've noticed that there was hardly any bleeding - so am thinking that is what was causing the extra pain at the site of the tumour which is just below the base of the spine.
Anyway, rang one of the Colorectal nurses today just for advice really and she said it IS normal for a build up of blood to suddenly expel itself like that but if I have severe heavy bleeding I have to contact them straight away.
I reassured her that today it is minimal again - but I will keep an eye on it over the next few days.

So today I feel tired, grumpy, uncomfortable and I'm going to sleep whilst Dj's at school.

On a lighter note I did manage to make a brilliant dessert on Wednesday which proved popular with everyone. I've named it 'Greek Lemon Crunch' - there's nothing particularly Greek about it except I made it with the lemons from Manolis' lemon tree in Rodos.
Dad brought them back with him after visiting Sarah and Manolis ealier this month. I'm sure it was the Greek lemons that made this soooo nice.
Here, have a piece.....I saved you one slice (sorry, the rest is history now) :-) 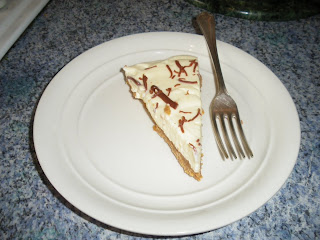