Some Memories of Christmases Past.....

Recently my mum sent me some old pictures by email of past Christmases when we were kids...it brought back some (very) distant memories indeed.
What do I remember about Christmas as a child? Well, we didn't have much money but we always got a pile of presents to open - not expensive, top of the range stuff or the latest craze, just good stuff that contained many hours of potential play.
We had plenty of food in the house, items that we normally wouldn't have such as nuts in shells, Christmas pudding and cream, mince pies and a selection of sweets.
Mum would have a Babycham and Dad would have a Pale Ale - we would get squash...Christmas crackers would be on the table and we'd all wear those daft paper hats - you know, the ones we all still wear now every year :-))
I've always remembered my doll's house and the tiny little items that went inside and was pleased to see that my mum had captured it in a photograph from all those years ago....looking at this photo I can still remember how happy I was when I found it that Christmas (I was 3 1/2 yrs old) and how much I loved the tiny little chairs and other accessories that went inside. It had a particular smell of wood that I immediately recalled on seeing it again.
For many years I actually believed my dad when he said he'd made it himself just for me....then I grew up and realised that this is a man who bangs nails into anything that moves (including shelves) so there was NO way in the world he made it - however it was still great.....
You can see my lovely dolls house here in the pic and my clever mum even managed to capture the excitement I felt this on getting this lovely present. (try to ignore the awful wallpaper and patterns that were 'everywhere' in the early 1960's..LOL) 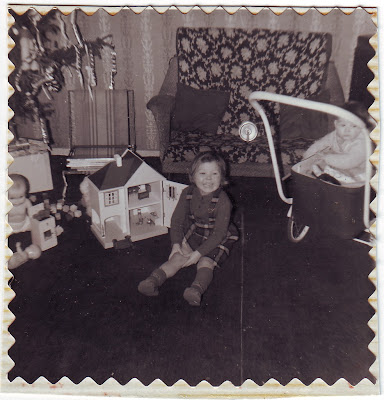 You can also see that by todays standards, the 'pile' of presents was much less than what some children seem to get nowadays. The difference was that what we received was always appreciated because we knew that mum and dad had gone without things themselves to make sure that we three children always had presents from 'Santa' on Christmas morning.
We had extras to open of course, things like colouring books, pens, plastic hair clips - 'extras' nowadays seem to involve designer labels, latest trainers, top of the range latest craze toys that will be dumped into the bottom of the toy box a few weeks after Christmas.
Parents still go without themselves but also get deeply into debt so that their children can compete with others.

Has Christmas lost it's meaning for some? Yes, I do think so.

We've spent far less money than usual on Christmas gifts this year and it's a tradition I intend to continue with.
I've always liked the fact that we all spend Christmas together as a family, eat lots of rich food, watch traditional Christmas TV and play board games in teams - however in the past I've also worried about what to buy for people, whereas this year I've tried to buy gifts that 'mean' something and spent less in the process.
No more jumpers that Dad doesn't really want or like - this year something smaller but more personal that I'm convinced he'll love.
As children we used to wake before mum and dad, usually around 4am, sneak downstairs and open our parcels whilst they were still sleeping - then we'd go back to bed and wake up hours later to play.
I wish that mum and dad had made us wait really, because it must have been a little disappointing to wake up and find that we'd already found our piles, ripped the paper off and then gone back to sleep after all their planning, preparing, rushing around buying, wrapping and hoping we liked what they'd found.....
I've always made my boys wait until we're all up and about - I wanted to see them open presents, not hear about it afterwards.
Our routine now is get up, have breakfast then Dj can open presents...this isn't rushed and sometimes he'll actually start to play with something then suddenly remember he's still got something else to open...
When he was younger he LOVED Action Man and would spend ages just examining one and totally forget that there were other presents left unopened :-)
Around 1pm mum, dad, Sarah, James will arrive (this year James and Leanne are coming Boxing day as it's Wendy's turn this year to feed them Christmas day) then it's time for Dj to show what he's received and maybe play a board game or two whilst the Christmas lunch is cooking.
After we've eaten and relaxed for a while it's adult present time and Dj then receives his gifts from family too - we introduced this a few years ago and it works really well. Before that we used to give out presents as people arrived but that always felt rushed to me, so I changed it to after we eat.
Everyone seems to like it and says the day feels fuller as there is still something to look forward to after food, so we've stuck with it.
Later on in the evening we have toasted turkey and pickle sandwiches and finger food, plus Louise's lovely yummy Christmas cake, chocolate biscuits, Cheese board, Olives, Roasted Peppers, crisps, dips etc and put on another few pounds (or stones) or two.
Alcohol is not a big part of Christmas for us - we have a glass or two of wine with lunch then most people go onto soft drinks or tea/coffee.
So that's how we spend Christmas....looking forward to reading about some of your Christmas traditions on your blogs.
More pictures from Christmases past......... 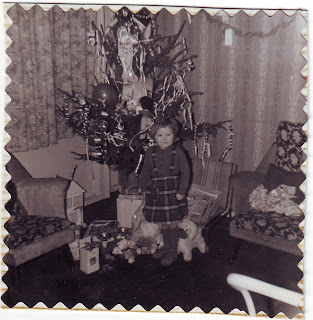 Eddie, my younger brother playing with dolls instead of his own stuff (we used to swop regularly) 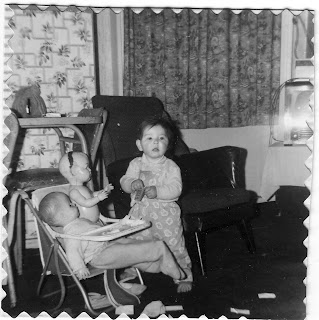 Me with cousin Elizabeth - neither of us looking particularly happy in this pic! 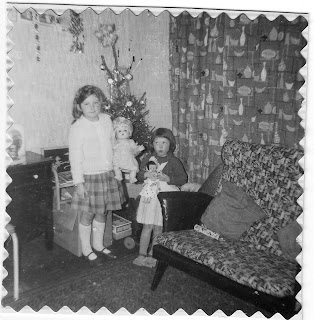 Us kids with Aunt Lou 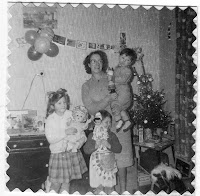 This one is Sarah back in 1969 -
She was absolutely mad on Cowboy stuff hence the cowboy hat and toy rifle present from Grandad Lea - LOL....never mind 'Annie get your gun' this is 'Sarah's got her gun, so run'.... 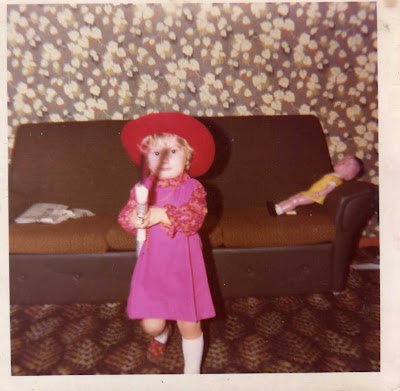 This is one of my favourite memories of James as a little boy...he LOVED this print of BA from the A Team and it had pride of place on his bedroom wall for many years.
It was one of the least expensive presents I'd ever purchased and one of the most loved.... 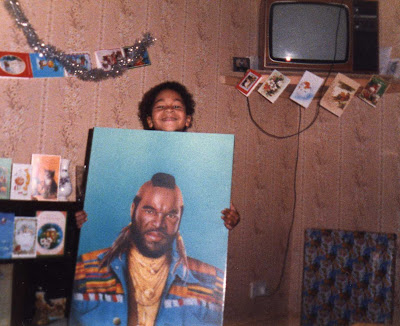 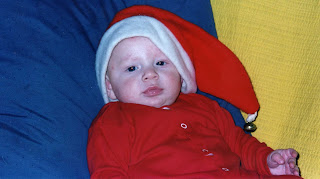 And finally below, this is one of those pictures that you just can't plan.
Took this shot of James, Leanne and Djamel concentrating on a puzzle book that James had received for Christmas (2008) and when we looked at it, realised the man in the background on the TV seemed as though he was studying the book over their shoulder as well - always makes me laugh when I see it 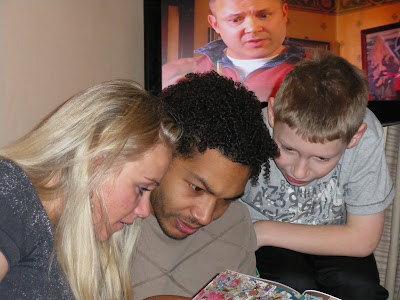