Today, Monday, 14th June, was the start of the second week of my 5 week Radiotherapy treatment. Went fine today pretty much in and out inside an hour - so all good :-)

Tomorrow after Radiotherapy I have to meet with the Clinical team and also the Doctor to review my Chemo treatment. I've given this so much thought over the past 5 days but am still no nearer to really knowing what I want to happen next (although I'm fast learning that it doesn't really matter what I want to happen, because things just crash along - completely out of my control lately)

I was on Chemo for only two days last week and that resulted in the onset of a shingles type viral attack, my gums have now bled for the past 3 days, the inside of my face is sore and uncomfortable, I have a dodgy 'ache' type feeling on the left side of my chest....and I have no idea how my body will/would/could react to a further 28 days of Chemo tablets. Like I said, I don't really know how I feel about it all now so I'll wait and see what they say at the hospital tomorrow and take it from there.
I'm confused.co.uk tonight and just want it all to go away and leave me alone.

On a brighter note, had a visitor from work pop in to see me this evening, Sophie, one of the young teachers at our school. She came round to drop off a present from the Office Crew which was a bright red ENGLAND shirt.
They thought I'd like to have it to wear during the next match, it's part of the Bobby Moore Bowel Cancer Campaign so I shall wear it with pride. Sophie tells me that the girls in the office have got themselves one each and will be wearing them when England play :-)....Let's hope it makes the difference eh. 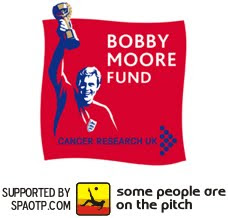 Rab's still smarting from the Algeria match yesterday - apparently the Ref's a cheat and blind and biased !!!
I've managed not to laugh in front of him though because he SOOOO wants them to do well (not a hope of course but he's optimistic at least).

Djamel's already told him 'Daddy, I'm supporting England during the World Cup and I hope you can live with that'...L0L....

As for Greece???? Manolis, what on earth happened there
Posted by Carole at 20:59