Today I had to go to the hospital to meet with the Stoma team and after that to meet again with the surgeon
I thought I'd finished with him until the surgery, but they contacted me and asked me to see him again today - wasn't really sure why although I suspected it was maybe because he's still wondering am I actually going to go ahead with this op or not....

So firstly to the Stoma team. This was only going to be a quick measure up ready for next week.
The idea is that you get to have some say in where they place the Stoma, working out where it will be most comfortable, interfere least with your clothing and fit into your lifestyle...
Anyway, the 'quick' meeting turned into a 1.5 hour chat with Anna, one of the really lovely Stoma nurses. I met with her before and she's great - very dry sense of humour, doesn't tell you it's going to be 'okay' and all fine....What she said was:

'It really doesn't matter what I tell you because until it's done you can't possibly get to grips with it, after that it's a choice of who controls who - you either choose to control your Stoma or you let it take over your life and control you'...

She then went on to say that I'll probably not even want to look at it for the first few days - and that would be fine. They will deal with it until I'm ready but she's confident that once I do decide to get on with it, I'll be fine.

We talked about irrigation in the future - at least 4 months after surgery once everything has settled. What that means is that you can irrigate the bowel daily *flush it out* and then you get no waste for approximately 24 hours - depending on each individual persons routine. I like the idea of that but we'll see how I get on.

I also told her I was worried about changing Stoma teams after my discharge from hospital.
Officially I should come under another hospital after discharge due to my home address - but she said she's going to sort it out so that I can stay with them instead.
I said I didn't want to have to go through the whole building a new relationship, going over everything again, with a new team - she agreed that it's all been stressful enough. I feel better about that already.

Lastly we discussed where the Stoma needs to go on me....I'm now marked up and covered in shiny tape ready for Monday...wanna see? 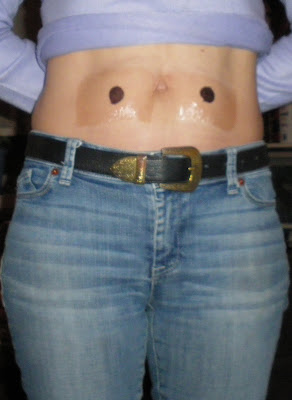 Our last part of the chat was about diet - she told me to ignore the diet sheets and eat whatever I wanted to.
She agreed that moving from a healthy diet to white processed foods would NOT be the best thing for me to do - and as my body is totally used to high fibre food hopefully it'll be fine. We might need to tweak things a bit but she felt that changing too much would be too drastic and probably lead to other problems such as constipation!

Finally our last bit of chatting was about hernias - Anna tells me that 50% (YES! FIFTY percent) of patients end up with a hernia after Stoma surgery.
She explained that this would mean an unslightly swelling, discomfort and probably a further operation to correct - maybe even needing to move the Stoma to the other side of the body.
It was then explained that hernia's develop when people do not heed the advice given about NOT lifting anything heavier than a cup of tea for 6 weeks, no housework, no carrying shopping or attempting to stretch to 'do' stuff, no exercises.
She maintains that hernia's can be avoided if advice is followed to literally do your walking exercises every few hours, rest and leave everything else to someone else.
I have plenty of volunteers ready to help out so I'll behave myself and do virtually nothing for 6 weeks - I seriously do NOT want a hernia and the prospects of a further op or dodgy Stoma.
If I've got to have one, it needs to look GOOD! :-))


Then I went upstairs and had my appointment with the surgeon....He's actually a nice man, he's kind and I know he does actually care about his patients.

He said that he was confident that by taking the antivirals the Shingles virus should be kept under control and therefore shouldn't be a problem with interfering with the healing of the wound - so that's good news.

We then discussed the PET scan again - he said he'd looked at it again in more detail and double checked all results and was happy to say that there appears to be no lymph node involvement (the MRI had showed that there possibly was a few that were affected) - so again that was good news.
Lastly he said he'd double checked the lungs/liver area and other tissues and could see no signs of any spread whatsoever - his words were 'seems to be nicely contained with no, or at least limited, spread'...Again, good news.

Then we talked briefly about Chemo after surgery. I've made it clear that I'm not happy about having further Chemo unless it's deemed absolutely essential.
I figure we can deal with Chemo IF it comes back in the future - I told him I'd rather be poisoned when there is something to poison instead of 'just in-case'...I reminded him that the PET is pointing towards nothing else flying around my system at the moment.

We left it that we will decide when we get together again approximately two weeks after discharge when I go back for my post op checks - depending on pathology reports, margins and whether the lymph nodes ARE actually in the clear.

He also reminded me that I will be monitored for 5 years (blood tests, scans and 6 monthly checks initially - moving to annual checks if the first two checks go well) but will not be classed as being in remission or free from cancer until we get to that magic 5 year marker.
He reminded me that Rectal cancer can be a real 'problem' for resurfacing in other places (liver/lungs) but that we would deal with that if and when it happened - which is exactly why I don't want Chemo for no reason when I may well need it for a reccurrance in the future.
He then asked me how I was feeling about things particularly the Stoma and the surgery - I told him I still don't 'want' the op but I've accepted that I have no real options and I'll be okay once it's done - somehow I'll find a way to deal with it and move on.
He nodded and smiled then said 'You will Carole, you will.....You're realistic, inquisitive, tough and you're brave and I feel you will be coping with this very well before you know it'.

So, that ended our meeting with him assuring me that he's going to do his best possible job on me and all will be well.
Told him it best be all well, and that I'm only trusting him with my life because he's a Greek man and my sister lives in Greece - He laughed alot at this and said 'Then I definitely have to do my best for you Carole'....
And I know he meant it :-)