Things that matter over the years......

Something Dj said this morning got me thinking about those little things that matter - things that you find yourself keeping for years and years - not because they're valuable but purely for emotional or sentimental reasons.
I've got lots of little bits and pieces from both boys - things like 1st Easter cards made at school, notes from teachers, reports, cards.
Both boys got me a small gift when they went away on their school journeys in Year 6 - James' gift was a small china little Teddy, Dj's was a small soft rabbit - they sit on my shelf in my room and I could not part with them.
As a parent you sometimes find yourself keeping things safe for them as well - and this was how the conversation started this morning....... Dj asked how 'Charlie' got to be so battered....So, who is Charlie?
This is Charlie 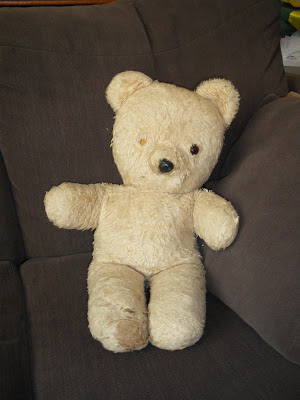 His full name is Charlie Bear - original eh...:-) - and he's now 29 years and 5 months old, he lives in my bedroom but belongs to James.
Charlie Bear was his first bear - he got him for his 1st birthday and they went everywhere together - until James' life moved on and there was no longer any space for Charlie...... Having said that he's never ever wanted to part with him permanently - hence the reason he lives in my bedroom.
He's lived an interesting life, has been involved in drawing on walls, messing up the toy box, tipping drinks over, drawing on freshly painted walls with my make-up, spraying perfume into the bathroom until you literally could not breath, making sink bubbles with the most expensive bathsoak......you name it Charlie was there in the frame, always involved and always looking so innocent.......
If I had a pound for each time I'd heard the phrase 'But it wasn't me mummy, it was Charlie' I'd just be so rich now :-)
Dj has a dog called 'Chad' 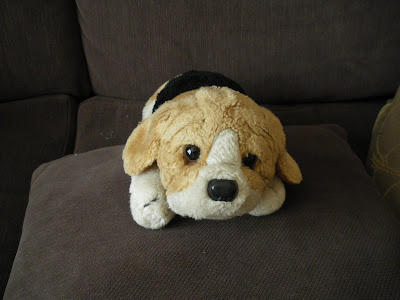 He's had him since he was a year old - therefore he's now 10 years and almost 2 months old...(those who know the story of when Chad got lost at Gatwick airport will also know that the age of 'this' dog is not quite right however sticking to the story and therefore Chad is just over 10 years old now) :-)
Again, he's been everywhere with Dj - wherever Dj has slept Chad has slept too - Algeria, Tunisia, Malta, Nan and Grandad's, Lou's, Sarah's (when she lived in the UK), Dorset to name a few....
Chad doesn't seem to have been involved in as many naughty episodes as Charlie but that's just because Dj didn't seem to realise he could blame him (in other words James, you were more cunning- lol)
So, what's the point of this post then?
Just thoughts really - I was thinking what do I have left from my childhood, which item did I keep with me for all these years since childhood - which item would I leave behind that was 'mine' and 'special' and the answer was nothing....
I never had a toy that I was seriously attached to, I didn't like dolls or traditional girls toys, things I had in my teens (LP's* etc) got 'lost' along the way as I moved from place to place...one thing I lost that really did matter and still bothers me today was a voice recording of James when he was about 3 or 4 years old. I kept it in the same place always and then one day it just wasn't there.
When I tell you I turned the house upside down looking for this, it is NO exaggeration...I never did find it though. Even now, talking about it I have the desire to go and search again (it wasn't even in this place when it got lost)...mad eh :-)
I know that Charlie and Chad will be with the boys respectively when I'm not able to look after them any more - but if I'd had a soft spot for a doll I have no idea what would have happened to that afterwards - neither of my boys are going to need a doll in their lives so maybe it's a good job I didn't like traditional girls toys :-)
And to answer the original question 'How did Charlie get to be so battered?'....love, Charlie was so loved he was squashed, sat on, slept on, hauled around, thrown on and off the beds, target practice for J when he was being a secret agent, taught to swim in the bath, dressed in a cape and flung from the window (yes, he was magical and he could fly), he was told the deepest secrets, read the most interesting books, took part in every aspect of a small boys life..... You name it and he's probably experienced it along the years.
Charlie ended up looking like this because he was so loved - which is exactly why I don't get him all fixed up. He's supposed to look like this now :-)
And I strongly suspect that Chad will look pretty much the same in another 20 years time.... 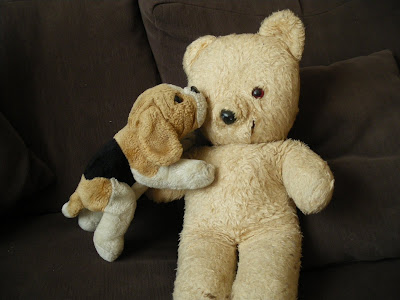 So, what do you have from your childhood and why do you keep it? Who will have it after you?
OR what are you storing for your children from their childhood?
* LP's for those of you too young to remember - Long Playing records were Albums recorded onto vinyl instead of today's CD's or MP3, iPods etc....
Posted by Carole at 12:11