Algeria moves to stave off unrest......

Algeria moves to stave off unrest - Africa - Al Jazeera English
Following on from the recent revolutions in both Tunisia and Egypt, who is next?

Rab and Dj were thinking about a week in Algiers during the half term holiday - for now, we've decided that it's not an option.

Could Algerian's stand against their government in the same way that Tunisians and Egyptians have recently done? Unlikely as the military there really do control things and unlike Egypt, would have no real qualms about shooting the people.

It has not been widely reported here in the UK that over the past few months at least 12 Algerians have set themselves alight in protest at the government oppressions inflicted upon them - it has not been widely reported that during their last protest, in January this year, 5 were killed and over 800 injured.
Whilst the world looked at Tunisia and Egypt, Algerian's were killed and injured but nothing was reported.

Tomorrow a march is planned in Algiers, the capital city. Demonstrations/marches are banned by the government - currently more than 20,000 additional police/military personnel are being drafted into the capital to assist the 10,000 already in place. Transport is being cancelled in an attempt to stop people attending.....

Will the march take place?
Will people lose their lives in an effort to better their living conditions?
Will the world notice this time... or will this be kept under wraps again whilst the world celebrates the downfall of Mubarak?

Update....2:40pm Twitter is buzzing with reports of the role of women in today's protests in Algiers, with some saying that police are tageting and arresting women. There are several photos of female protesters being hauled off by police on the wires. 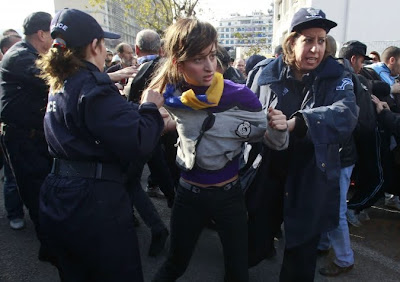 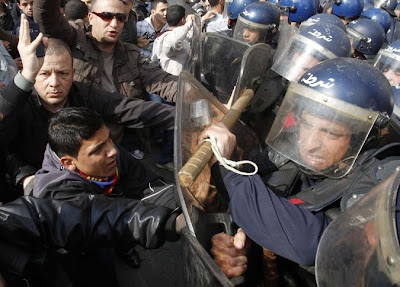 All pictures from Al Jazeera - English
http://english.aljazeera.net/
Posted by Carole at 22:26