As I mentioned in earlier posts this year Rab was responsible for cooking the two Christmas meals for everyone.
When we discussed this earlier in the year I wasn't sure how mobile I'd be or how much I'd be able to do and I pondered on the idea of going to mum's instead or eating out...Rab immediately said 'I'll do Christmas, you can just supervise me'.
Okay, I admit, I was amazed. I always do all the cooking, preparing, and organising for Christmas - he's always organised the table. It has always been that way - but this year Rab took charge.
On Christmas day we had mum, dad, Sarah and Manolis over for Christmas lunch - so in total there were 7 of us.
Rab prepared vegetables, sorted out the roast beef, got himself a time plan going for things like cooking the Yorkshire puddings and he did really well. I was able to do more than I'd envisaged but the main jobs were all done by him.
Boxing day we had all the same people plus James and Leanne - so 9 of us. Turkey was put in around 9.30am and I stayed in bed until midday (!!) whilst Rab just got on with preparing the vegetables and organising his table for later.
Although I was able to do more than expected, Rab did the vast majority of preparing and with some supervision, cooking too.
I usually end up totally exhausted Christmas evening (not complaining at all - just stating facts, I like doing Christmas and it's a 'nice' exhausted)...but this year I was just normal tired - and Rab was exhausted.
I'm really proud of how he's coped since I was diagnosed. He doesn't say much at times, but that is his coping mechanism....
Whilst I was in hospital he coped brilliantly - remember this is a man who had never used the washing machine before, never mind ran a household...he got himself a washing rota going so that Dj's uniform was washed and ready, ironed all the school shirts, cleaned, shopped and cooked and visited me daily.
Dj didn't miss a single day of school whilst all this mess was going on, Rab kept him on track.
Since I've been out of hospital, Rab's had to go back to work (sometimes working stupid hours) but has continued to cook meals at home and make sure he's doing anything that I've not been able to do.
Now, he's done Christmas too....and then he went back to work on Monday at 6.30am..:-(
Anyway to finish up I'll just add that he even had time to dress up as 'Santa' to make Dj laugh.... 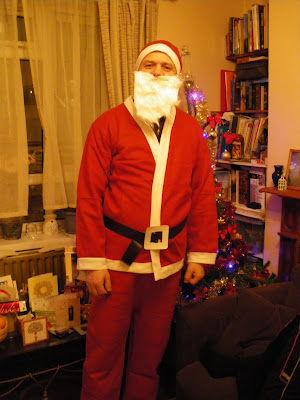 And this was Rab after wearing the costume for 10 minutes..'Tired out Santa'..:-) 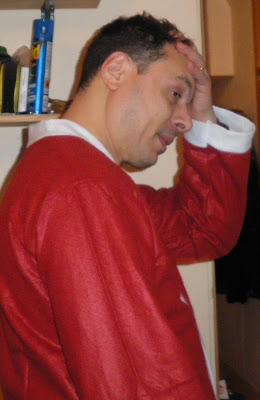