Happy Birthday to my Youngest Son :)

Today was Dj's 12th birthday - we asked him what he'd like to do on his special day and his reply was 'just spend it with Nan & Grandad and keep it quiet' - so that was what we did.

He was pleased with his presents, mainly books and Xbox games from us - although Rab did get him his BB gun that he'd been virtually begging for. I was against the idea but it is only small plastic pellets and does look far less realistic than it appeared on-line.
He loves shooting things (not people - lol, just plastic bottles, tin cans, targets etc) and has a huge collection of Nerf guns, catapults, sling-shot, potato gun, cap gun....sigh.... so although I don't like the whole gun thing I was democratically outvoted on this one...Not to worry I generally do win, so occasionally it's right that I'm over-ruled and outvoted :) And he's happy.

Apart from that he received gift vouchers from Nan & Grandad, Sarah & Louise (thank you all) and also a set of books from  Nan & Grandad...lovely T-shirt and hoody top from his brother & Leanne plus they've given him an IOU for a trip to Thorpe Park (Theme park with rollercoasters etc) as they are away at the moment...Jacqui got him a lovely set for his WWII collection which included a replica Identity Card and Rations book...My Mum's friend sent him cash...and he has other bits on their way at a later date.

So the answer to 'What did he get?' is, probably too much as usual - but he doesn't get (expensive) presents at times other than Christmas and Birthdays so I figure it's okay to 'spoil' him twice a year - plus a very large portion of his presents is made up of reading material and I think you simply CAN'T spend 'too much' on books. His love of reading is well worth the cost in my opinion. 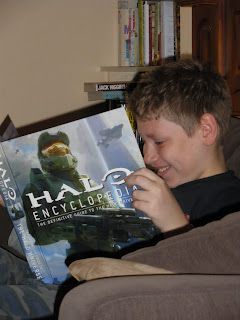 He had a small cake and I found a 'sparkler' in the drawer that I knew he'd be happy to light whilst we sang Happy Birthday to him - he twirled it around and this is how it came out in the photograph.... 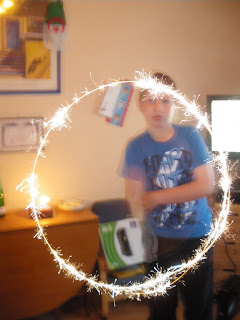 On Saturday he's going to spend the day with his best mate, A...they are going to have an 'Xbox Halo day' apparently..(he's absolutely mad on anything 'Halo') then the following Saturday we are taking him and four of his friends out for pizza and maybe cinema afterwards.

I asked him tonight what was the best part of his birthday and he said 'I'm not going to lie, it was the presents' ........LOL!